Today marks a second major milestone with the launch of our first slot game called, ‘Cosmic Fusion’, on the Leander Games Remote Gaming Server platform, LeGa. The game has initially gone live with NetBet a key partner of Leander for an initial two week exclusive period. NetBet are running a promotion on the game and it features first on their ‘new’ tab under ‘Casino’.

The game has a high volatility but is only 10-lines and players can stake at the lowest denomination so free spins can be issued at a low cost. The game features include a giant symbols base game feature where giant symbols cover the middle three reels and will always land flush, as the game pays left to right and right to left there’s big chances for a multi-ways pays. In addition, whenever a wild supernova symbol lands on either reel 2, 3 or 4 it will expand and award a respin. Any winning combinations on the first respin will pay at x2, second respin x3 and on the third respin at x5, the additional respins are awarded for getting further wild symbols on reels 2, 3 or 4.

The game is available in over 34 languages and a multitude of currencies. Cosmic Fusion has been certified in all major jurisdictions including the UK, Alderney, Italy, Spain and Denmark. 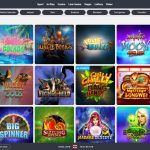