Mutuel Play Ltd is pleased to announce that The Showman has gone live with Tier 1 European operator Mr Green via the Leander LeGa RGS. The game has performed really well across other Leander operators and it was one of the first to be chosen to go live by Mr Green of the 3rd party suppliers developing onto the Leander platform.

The game is fully certified to launch across the UK, Malta, Gibraltar, Alderney, Spain, Italy, Sweden and Denmark. The game has been translated to over 30 languages and is available in numerous currencies.

Get in touch if you would like to launch The Showman or any other of our slot or Bingo/Keno/Lotto titles.

Mutuel Play is pleased to announce the launch of Candy Burst across the Leander LeGa RGS platform. The game has initially gone live with Buzz Bingo for a short exclusivity period before being made available to other Leander operators in over 30 languages and a multitude of currencies. The game is fully certified in the UK, Malta, Gibraltar, Alderney, Italy, Spain, Denmark and Sweden.
Candy Burst is a traditional 3×5 slot game utilising the unique ‘Clearing Symbol’ feature that Mutuel Play have devised and that is working really well on one of our other slot games, Splatter Cake. Like Candy Crush, special symbols clear rows, reels, diagonally, adjacent and all symbols when they land thus creating more opportunities for wins. The wilds are immune to the clearing so stay on the reels when more symbols fall down. It’s a different take on the ‘Cascade’ feature that has been massively successful with other slot suppliers.
The theme is soft, bubbly and bright and the game UI is designed to be fully immersive for the player with symbols floating around the screen. The maths is of a high volatility and can result in some really big wins in the free spins feature where there is a high chance of a retrigger and more chances of clearing symbols appearing.
If you are interested in learning more about Candy Burst or any other Mutuel Play game please get in touch.
Read More

Mutuel Play in the hunt for two awards

Mutuel Play Ltd is proud to announce we have been nominated for two awards at this years ‘Which Bingo’ awards taking place at Madame Tussaud’s, London on the 26th June.
We are entered into two categories, firstly, Splatter Cake an exclusive slot we developed for Buzz Bingo on the GECO Gaming (Playtech) RGS, and secondly, Bingo Millions 90-Ball, which is our flagship multiplayer fixed odds Bingo game we recently launched in April 2019.
Splatter Cake is a 3×5 slot game with a unique clearing symbol feature akin to something you might see Candy Crush. The game is bright, bubbly and a perfect theme for the bingo audience. It is already B3 maths compliant and will be making its way into Buzz retail bingo clubs up and down the UK later this year. Since its launch in September 2018 it has been a real hit with the Buzz players and continues to perform well.
Bingo Millions 90-Ball is our take on a Lottery/Keno/Bingo game, with draws taking place twice a week on Wednesday and Saturday’s at 10pm. It gives operators a new marketing angle for targeting new types of users and offers players the chance to win life changing sums of money with our RISQ backed bet-on-insurance facility. The jackpot is starting at £1.5m and we have ambitions of ramping this up to £25m in big draws we’ll run at certain points in the year. The game is exclusive to Buzz Bingo players for a short period of time before being made available to other UK operators and we’re also hoping to launch the game into Bingo retail clubs in 2020.
Rhys Owen, CEO and founder of Mutuel Play had this to say about the awards nomination: “I’ve been attending the Which Bingo awards for many years and am finally pleased to be entering products that the team have worked hard developing and launching. In terms of Bingo awards it’s the only ceremony catering for businesses like us. I always knew Splatter Cake would be a firm favourite with Bingo players and although Bingo Millions is new to the market I think it will have a resounding effect on the way operators work with suppliers and hopefully lead to a wave of new software developers creating bespoke and unique content for bingo/lottery players.”
You can vote for the Mutuel Play games by following the link below.
Vote Here
Read More 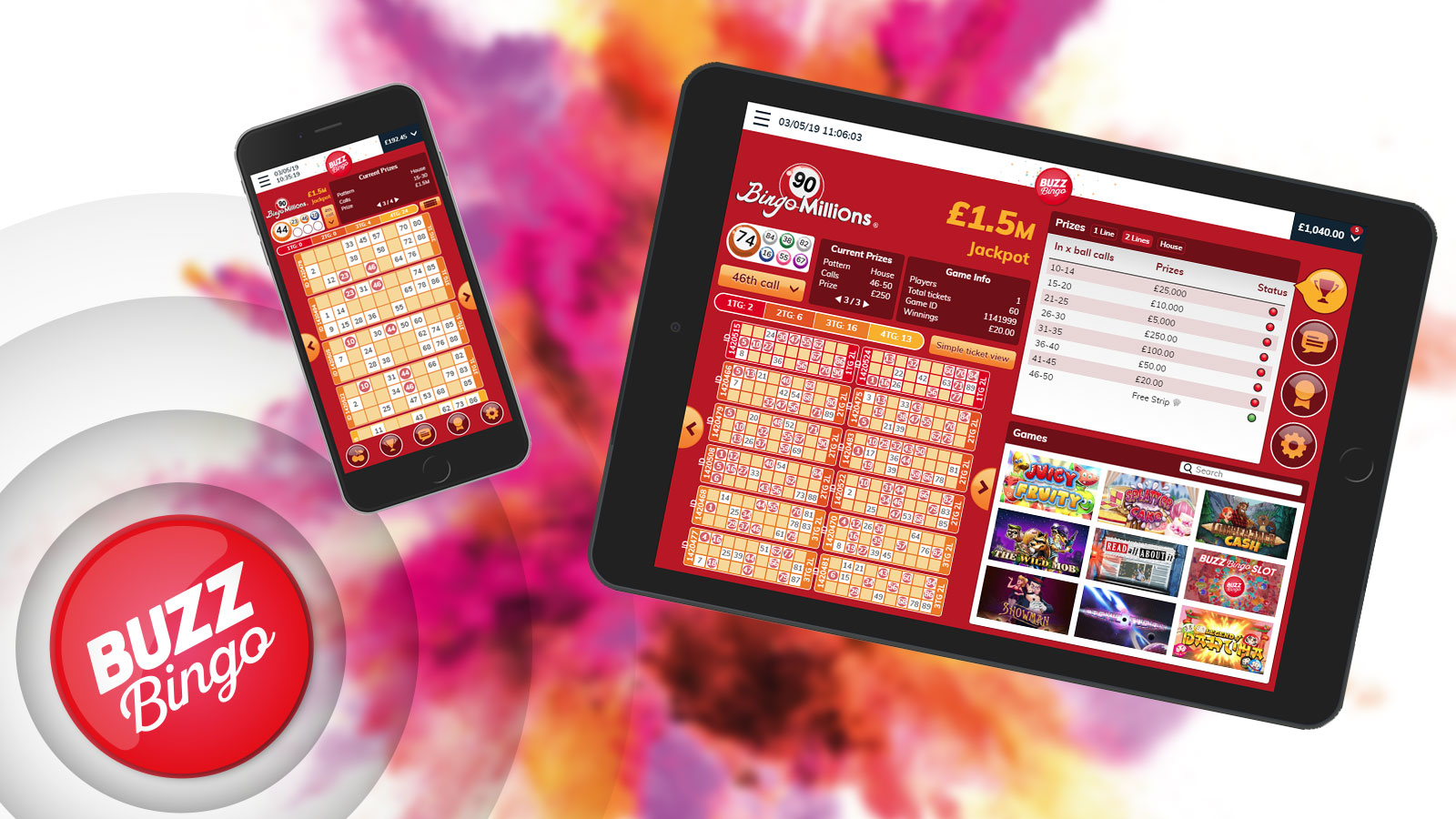 Mutuel Play Ltd is pleased to announce the launch of its flagship product, ‘Bingo Millions’. The first variant of which being the 90-Ball game. The game will initially be launching with Buzz Bingo in the UK with ambitions to launch the game with other licensed operators digitally across the UK. We are also in discussion with Buzz Bingo about launching the game into retail in their 120 Bingo clubs across the UK in 2020.
The draws take place twice weekly on a Wednesday and Saturday evening at 10pm. Tickets are priced at £0.50, or a strip of six tickets for £2.50 and players can win a wide range of prizes from a free strip to £1.5m for hitting a full house within 30 calls. The Jackpot is fully backed by the RISQ i-Gaming Bet-On Insurance facility, additionally Mutuel Play can create other variants and boost the jackpot up to £25m, which we’ll be doing when we run Mega draws throughout the year.
The game uses a fixed odds prize table so is different to traditional Pari-Mutuel bingo. Players can win multiple prizes and multiple players can win so  it offers a new dynamic to traditional bingo where players are battling one another to reach the prize pattern first. As the prizes are spread among more players the game boosts retention and the lottery-style purchasing pattern can be used to support subscription/Direct Debit acquisition/retention offers.
Rhys Owen, CEO and Founder of Mutuel Play had this to say; “We’ve been working behind the scenes on developing this game for some time and are very pleased to be launching it with our partner Buzz Bingo. They’ve been great supporting our business and will be running some unique campaigns off the back of the game to give them an edge in Bingo, it’s great to launch innovative games with an entrepreneurial and like-minded business. We have a number of ‘Bingo Millions’ branded titles launching this year to cater for different types of players and we’re hoping to replicate the success of ‘Big Time Gaming’s’ ‘Megaways’ slot feature in the Bingo vertical.”
The game is available to other licensed operators looking to expand their portfolio of games either for Bingo, Keno, Lotto/Lottery and soft Casino players. Get in touch if you would like to know more about the games we build.
Read More